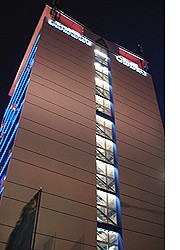 The organisational structure of the Elektromontaż Rzeszów S.A. Capital Group, which currently employs over 650 people, is based on several separate organisational units (Regional Directorates) and subsidiaries.

The company's activity, which includes the execution of electrical installations, is carried out throughout Poland and abroad. The company has units in Rzeszów, Warsaw, Cracow, Wrocław, Poznań, Dębica, Mielec, Tarnobrzeg, Sanok, Jasło and Przemyśl. In order to execute the low current installations, automatic control engineering (AKPiA) and BMS systems as well as to execute the measurements and start-ups, independent units have been established.

The Group comprises the following companies: